I recently shared all of the amazing moments from my son, Andrew, and new daughter-in Law, Liz's, wedding. [If you missed it, you can read all about it here(the rehearsal dinner), here(the ceremony), and here(reception).]

I also wrote a post for Catholicmom about my thoughts as a mom on the wedding. And even though there was certainly a tremendous amount of joy, there was also some pockets of grief because even good change can be hard.

Andrew and Liz's reception was held at Independence Harbor. It's a beautiful venue only 20 minutes from the church that has amazing grounds! We took all of the pictures there and the colors are just amazing. I can't wait to see the professional pictures!

Andrew does not enjoy taking pictures. We were almost done taking all of the wedding party and family shots and he looked over at me and said, "I'm so glad this part is almost over!" To which I reminded him that he still had to take lots of couple shots with just him and Liz....and he groaned loudly. (Which made me laugh:)


I don't have any of the couple shots except one that was sent to me by one of Liz's aunts because once all the group photos were done, Jay and I headed in with the kids to mingle a little. Andrew wasn't tortured with pictures for that much longer(!), and we all lined up to be announced. I had made a sign for Jay and I to hold as we walked in. The sign idea was mine and it came about because it was stressing me out to think of something "cool" to do as we walked in....Jay and I are not the most graceful people...so "hiding" behind a sign and not having to look awkward doing some kind of dance move seemed like a good idea to me! (Plus, it gave everyone a good laugh!) 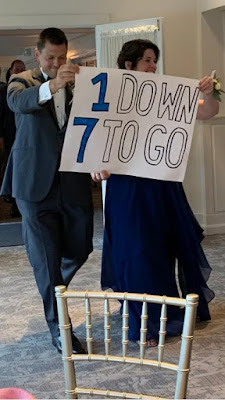 The wedding party all got announced and entered the party in a fun (and non awkward) way. Even Kate looked cute as she dabbed her way to the table. The bride and groom made their entrance to All-Star...another Shrek reference...and lots of cheering!

The speech from the maid of honor was touching and the best man had everyone laughing. Liz's dad, Chris, gave an emotional speech that brought tears to more than a few eyes. Liz's family has had a tough year with the loss of some very close family members, so there has been a lot of sadness mixed with joy. And "giving away" your oldest daughter isn't too easy either, especially since she was moving an hour away. But Chris also said some really nice things about Andrew, and his family was cheering him on to finish all the beautiful words he had prepared.

And then, it was time to party!

The reception was so.much.fun! The music was great and people danced the entire time. There was so much energy...and some of the moves those "young people" had were pretty amazing.

The mother/son dance was another really unique moment. For months before the wedding, I had talked about doing something other than just a traditional mother/son dance. My motive was mostly to try and not get all emotional in the middle of the reception! Plus, I thought it would be fun! Two days before the wedding, Andrew decided that we should do a Rick Roll. A Rick Roll is when someone starts playing a song and then' partway through, Rich Astley's "Never Gonna Give You Up" breaks in. So we found a video on Youtube with some simple dance moves and practiced a lot...mostly apart but a few times together. I wasn't sure if we could pull it off, but I was willing to risk embarrassing myself in front of 125 people to try it!

No one knew what Andrew and I were doing except Jay. And in my worry about the dance moves, I forgot to ask someone to tape the dance from the beginning. Thankfully, a couple of my friends started recording as soon as the "Rick Roll" happened!

So, just imagine that Andrew and I are dancing to "Humble and Kind" by Tim McGraw. Then, 18 seconds into the dance, this happened......

It wasn't perfect! Andrew and I won't be trying out for Dancing With the Stars anytime soon(!), but we have an awesome memory. I'm SO glad we did it!

Another special moment was when Andrew and three of his groomsmen who have been friends since high school, performed the choreographed dance that they had done in high school in their senior year for the Mr. Stang competition. This was a totally last minute decision that came up at the rehearsal dinner. The guys practiced several times the morning of the wedding...(because guys have very little to do to actually get ready!)...and it was another really memorable and entertaining moment!

Another spur of the moment idea was the best man challenging the groom to a dance off...which was another really fun thing to watch! Jon is a lot more flexible than Andrew...and didn't know about Jon's idea until the dance happened...but Andrew was a good sport! The DJ declared it a tie...because the groom can't be overshadowed on his wedding day after all!

The whole night was so special! I wasn't sure how Peter would do for a whole evening of music and people, but he did amazing. He loved wearing his tux and he was a dancing machine! It made the night even more fun. Kate and Luke danced the night away as well! So many memories were made as we shared the moment with family and friends. 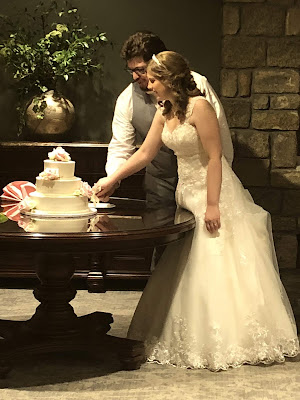 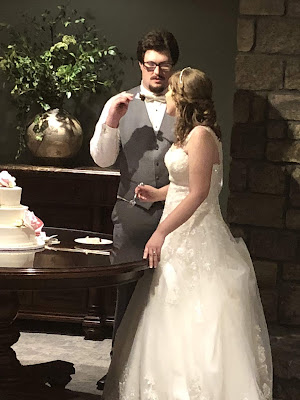 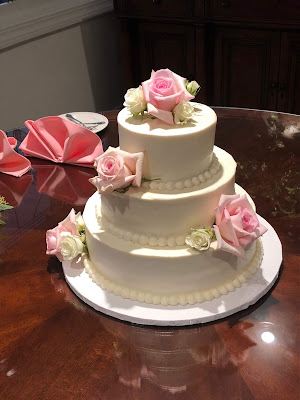 The party ended way past bed time and the flower girl didn't quite make it to the very end. 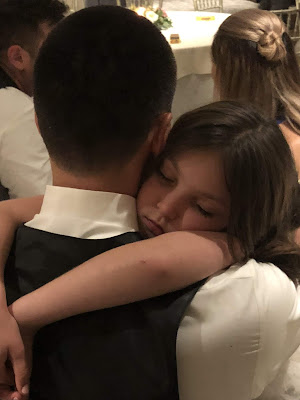 At the end of the night, the DJ..who was awesome!..announced the last dance and invited Mr. and Mrs. Hamel up to the center of the dance floor. Andrew looked over at Jay and was clearly looking for me as well...until Jay mouthed to Andrew, "He means you." And it dawned on Andrew that he and Liz were the Mr. and Mrs Hamel that the DJ was talking about. It made us all smile. :)

The day was just perfect from beginning to end! So many special memories! And, the best part, is that now we have another daughter in our family!