Linking up with Kelly...

#1: Filled With Joy
Our house is riding a "joy high" because of some very special, midweek excitement......Andrew got engaged!! We are all so incredibly happy and we all love his fiance, Liz! Liz is a warm, sweet young woman whose personality fits so well with Andrew's.

#2: The Ring
Andrew has been saving up since he started his first real job in July. I was really touched that he invited me to go pick out the ring with him. Sarah made it obvious that she would love an invite too, so Andrew included her as well. He wanted Ellie to come, but unfortunately she had to spend most of the day watching/playing volleyball with her school's teams.

Andrew did a great job communicating what he was looking for with the sales people we spoke to. We went to two stores. At the first store, the sales woman was a little too "enthusiastic" and wasn't listening to what Andrew was looking for. She also kept mentioning financing, which he repeatedly told her he didn't want to do. Andrew had a healthy budget and he wanted to stick to it!

We went to Hannoush Jewelers next and had a much better experience. That was also where Jon had gotten Marisa's ring and we happened to get the same sales woman. (which I was very excited about bc she had been so kind and helpful with Jon!) This sales woman was very attentive to what Andrew was saying and helped to explain diamond quality and the different categories. Andrew narrowed it down to three rings...then two...and, with some encouragement from Sarah who takes credit for his choice, picked "the one". It is very pretty and classy. A round diamond in a lattice setting. (Liz loves it!:) 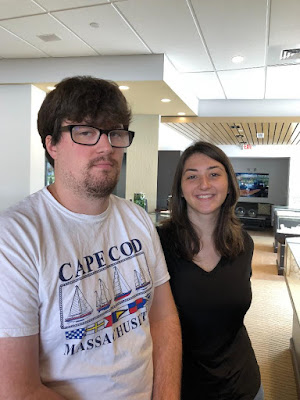 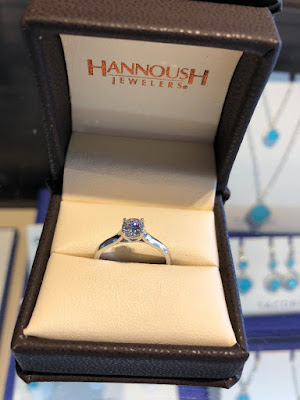 #3: Coaching
When Kate and Luke got home from school on Wednesday I told them that Andrew was going to ask Liz to marry him that night. They were both super excited! Kate was a little concerned though and immediately dropped to one knee and said, "He needs to do it like this." So, we sent him a picture to make sure he knew how to propose the right way. (lol) Then, Kate got concerned, "What if he forgets the ring??" She is a future micromanager if I ever saw one! 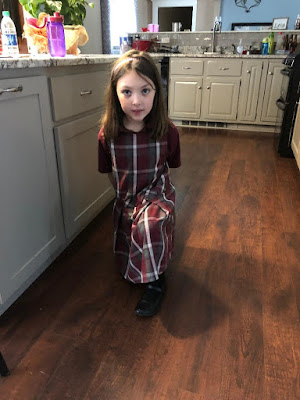 #4: The Proposal
Andrew and Liz met through Catholic Match a little over a year ago. She lives about an hour away from us, so for their first date they met somewhere that was in the middle...LaSalette Shrine. Andrew wanted to propose where it all started. They always get together on Wednesday nights and usually go to dinner and play trivia somewhere a little closer to Liz's neck of the woods. Andrew told her that there was a restaurant that was starting up a trivia game in Attleboro and told her to meet at LaSalette so they could drive over together. Liz said she was "mostly surprised". I haven't actually heard the whole story from start to finish, but Andrew says that Liz interrupted him when he took a breath and said yes. Liz says that she thought Andrew was done. It makes for a cute story and is a wonderful beginning to this next stage in their relationship. 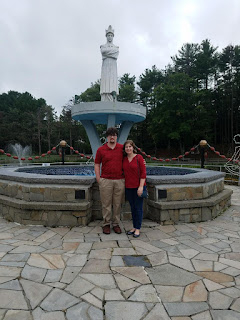 #5: Dinner became Dessert
Andrew had planned to take Liz to a really nice, romantic restaurant for dinner after the proposal. Liz, not realizing the plan, ate a really late lunch at 3 and wasn't hungry at all at 5! Just some extra practice at rolling with life! So, Andrew sent me a text to tell them they were on their way here to celebrate and could I please go get them their favorite ice cream from our local homemade ice cream store, Acushnet Creamery. I ran out to grab double chocolate(Andrew's fav) and espresso brownie fudge(Liz's fav) plus a couple other flavors for our crew for an impromptu ice cream party. I threw up some Valentine's Day lanterns and brought out the special sign I had bought when Jon and Marisa got engaged. Our parents were able to come by despite the last minute invite. Sarah asked her teacher to get out of her night class a little early. Ellie's coach let her leave the varsity volleyball game early to come and celebrate.(Ellie plays JV and her game had ended but they stay to support the varsity team.)  Marisa even drove over after her night class let out.

#6: The Arrival
The minute Andrew and Liz got to the door they were bombarded with Kate, Luke and Peter. Kate asked, "Did she say yes?!?" Liz had the biggest smile on her face all.night.long and they were both just so happy. Despite a few minor protests from Andrew who doesn't like pictures, I got them to take a few shots under the Valentine lights.


#7: On To Planning
It was such a great night just spending time together listening to everyone talk and ask questions about the thoughts Liz and Andrew had on the wedding. Seeing Ellie, Sarah, Marisa and Liz with wide eyes, bobbing heads, and smiles on their faces as they talked about details was so special. Watching Marisa and Liz compare ideas was so heartwarming since they are both going through this special time of life together. Jay and I are INCREDIBLY blessed to be able to call both of these young women our future daughters-in law!

Liz already has lots of ideas for the wedding. She and Andrew should have the venue picked by next week(Liz already has a favorite that penciled them in but will be checking out a few more on Saturday just to be sure) and they already spoke to the priest about the church. The wedding will be this coming August(!)...and I'm sure the time will just speed by! I'm so excited to see the choices she makes and how everything comes together. I can't believe we are at this stage of life! It is truly such a joy filled time and I'm trying to just soak it all in and thank God for these blessings.