Peter is part of a local collaborative and his classroom is in a high school just a couple of towns over from where we live. Peter has Autism and is not able to be in a regular classroom. Because we live in a small town that doesn't have a program for kids like Peter, we get to choose one of the local Collaborative programs that services the small towns in the area.

Peter just transferred into his new classroom in early November. He had been in a collaborative classroom in a local middle school prior to that, but all of the other kids had "aged out". So, when he started the year, Peter was alone. It really bothered me and I spent lots of time communicating with his teacher and the person in charge of the program. They were trying to plug Peter into more activities with other "neurotypical" kids to give him opportunities for socialization...but it still didn't feel right. All that kept popping in my head was, "It is not good that man should be alone."

After speaking with our SPED Director, we decided that switching classrooms and schools would be best for Peter. It was the best decision for him and is thriving in his new program! :)

Peter's class has 8 kids in it, including him. They have one main teacher and three aids. There are also various therapists that come in and out over the day. They also have neurotypical students from the high school that are part of a program that come in different periods each day to work and play with Peter and his class mates. (This is by far my FAVORITE part of this program! Peter even calls one of the student helpers his "girl friend"! lol I love that Peter has role models and I love that the role models are getting exposure to kids with disabilities. The level of acceptance and kindness is incredible when neurotypical kids...sorry, I hate the word "normal"...spend time with kids with disabilities. There is no fear or awkwardness...they accept kids like Peter for who they are. Neurotypical kids that have spent time with special needs peers see beyond their limitations...the lack of eye contact, the lack of speech, the weird noises...and they connect with them on whatever level they are able to.

It's a blessing to everyone!

I signed up for Dynamic Catholic's Best Lent Ever. Today's message happened to be on "Visiting the Sick". I didn't listen to it until I had already gotten home from visiting Peter's classroom....but it talked about being present when you spend time with people that are ill, and not just seeing the visit as something else checked off a list.

I know that for myself, this time of year is SO busy that it's a struggle for me to stay in the moment and just enjoy whatever activity I'm on! It's something I have to work at all.the.time!

I enjoyed my visit to Peter's classroom. My Dad, Mom, Kate and our buddy, Declan came, too. I think Peter was happy that we were there. His teacher said he spent much of the morning looking for us outside the window. He came right over to us when we got there. Of course, the whole time we were there he played on the Ipad or walked around the room. The questions we asked him received minimal answers. I had made the pasta dish that he likes before we left to see him so he could share it with the class. He hadn't taken a bite, yet, from what I put on his plate before we left.  He was more interested in the mashed potatoes and pears that I had packed in the morning from home!

I got to meet a couple of other moms and I got a chance to talk to his teachers and speech therapist a little. I enjoyed spending time with Peter's classmates. Some were more withdrawn and just did their own thing like Peter. A couple were more talkative. One young man in particular, Ben, came right over, introduced himself and shook hands, and enjoyed watching Kate and Declan check out the giant exercise balls in the room. Ben was a BOSS with a rubics cube!! He would mess it all up and then solve all the sides perfectly in just a couple of minutes! I am SO impressed!

As a mom....we give and give and give and give until we have nothing left...then we somehow manage to squeeze just a little more give out! SO many times we give without much in return. I think this is true with any child...but especially with a special needs child. There are so few things that cause Peter to have a reaction that shows pure joy...(aka one of the ways that makes me feel like a success as a mom!) But that doesn't mean that I don't keep trying! His happiness might not be the same happiness that our other kids have....but that's ok. Just as long as he's happy! :)

The Evolution of the Christmas Card!

I've written dozens of blog posts in my head that never made it to my blog space! So many times I have thought of how much I miss this space...yet, life and the lack of hours in a day, always managed to get in the way.

There's so much I haven't shared...haven't chronicled for my own kids. It just felt overwhelming!

But I've missed this space! I can't promise it will be consistent...but I will certainly try to just jump back in!

What was the catalyst to begin blogging again?

Well...I FINALLY got around to ordering Christmas Cards today! And, unlike last year, all of the kids are in the picture! At least I hope so! I don't pick them up until Saturday, but I paid VERY close attention and counted to 8 multiple times to be sure! (Jon was closer to the middle this year, so if someone gets cut off it won't be him!)

I took over 20 shots and I had 3 to choose from! With our crew, you know none of them would be perfect! (And they lived up to the expectation!) And I'm ok with that! :)

Since it's 7 Quick Takes Friday, I'm going to share our "Not Top 7". Pay close attention to Luke's face! I laughed so hard I cried! (literally...Jon came in to make sure I was ok! In his words, "I thought someone died.")

Then I showed him the pics and he laughed out loud, too!) 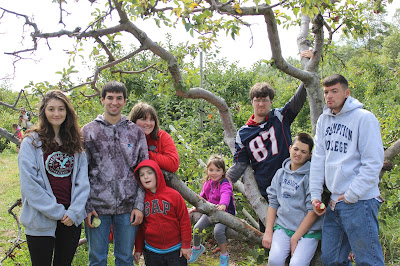 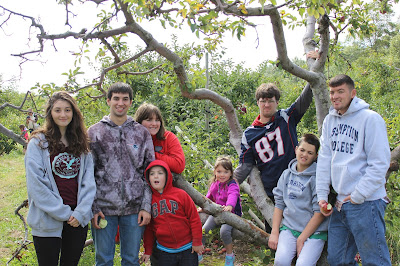 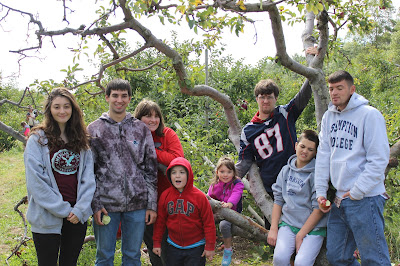 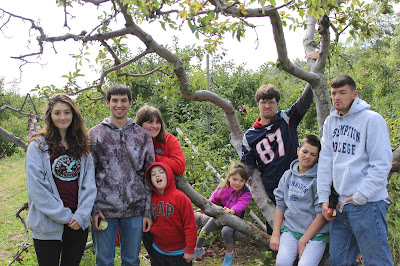 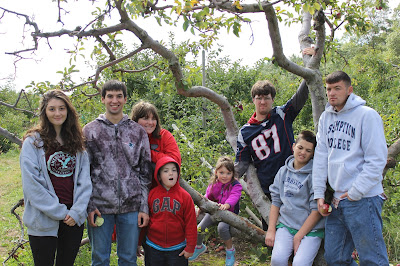 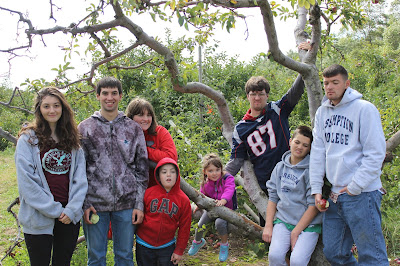 Note: Kate is just super cute throughout the "photo shoot" sitting in that tree!
Ellie is always smiling.
Mike has his "too cool for school" face on...maybe I' should cut him out of the photo on purpose this year! ;)
Andrew has the same "grumpy cat" face in every.single.pic!
And Peter was just not interested in any way what so ever!

Oh, well! 8 kids later and I'm happy that most of them look good! 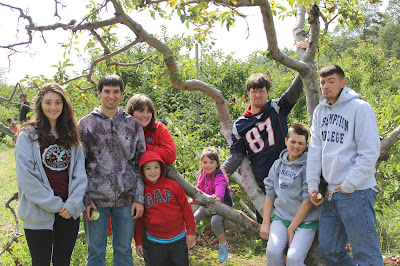