As promised, I have lots of details and pictures of Jon and Marisa's Engagement Day!

About two weeks ago, Jon proposed to Marisa. They have been dating for a little more than 3 1/2 years and Jon has been planning to propose since November.  In January, Jon purchased the ring and met with Marisa's Dad on the sly to ask his permission to marry his daughter. (I LOVE this tradition!) Then we waited...and waited..and waited.. for Jon to determine the right moment to propose. (I may have been just a "tad" impatient. But I kept reminding myself that this is Jon's story to tell and I had to just keep quiet and wait! so.not.easy!)

Jon had a lot of different ideas for proposing. He finally settled on making the big moment on Second Beach in Newport, which is a beach Marisa really loves to go to. Thankfully the weather was good because I don't think Jon had a Plan B...we joked that he would have to go the the New Bedford Whaling Museum to propose since that was where their first date happened way back in August, 2014!

Jon picked up Marisa and they drove to Newport for a late lunch of chowder and salad. Then, they went for what Marisa thought was just a nice walk on the beach on a beautiful sunny day. They were holding hands and Marisa was a little ahead of Jon when he tugged her back towards him. When she turned back, Jon was down on one knee with the ring in his hand. Marisa was COMPLETELY surprised. When Marisa looked at Jon, she called out, "Shut up! No...I mean YES!" So Jon told everyone that she said no at first but then changed her mind! (Once a tease, always a tease!)

Thankfully there was a nice couple on the beach that took a picture of the newly engaged couple. 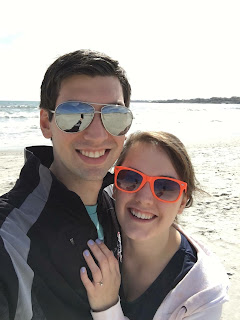 I offered to Jon to host a surprise engagement party the night he proposed. This way, he could surprise Marisa twice in one day and celebrate with parents, grandparents, siblings and friends that would make up the bridal party all together in one place. Most of the people attending the party thought that Jon was throwing a surprise birthday party for Marisa. Since Jon will be in Ireland for Marisa's birthday, it was a good cover! So the surprise party was really a surprise inside a surprise!

None of my kids knew...though Sarah and Andrew were suspicious...so planning and decorating were challenging! I had several decorations that were engagement theme hidden away that I pulled out once Marisa and Jon came in and announced their good news. As part of the decorations, I had a bunch of pictures of Jon and Marisa developed and framed around the house. I even managed to get a picture of the beach engagement. Jon and I had a special code. When he texted me, "What's for dinner?", that was my cue that "the deed had been done" and that he had emailed me pictures. I quickly went to the CVS website, uploaded the pics, and Jay picked them up for me 10 minutes before everyone arrived! I love creating the little, special details!!

Ellie really had no idea the engagement was happening that day. I happened to pick a bottle of Coke at the store that had Family written on it. Before the party started, Ellie said, "We can't use this soda...Marisa is only a friend." It was SO hard not to blow the secret in that moment!
So, of course, I had to take a picture of it! 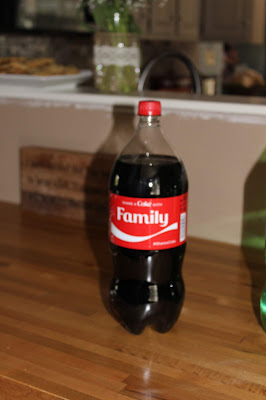 The party was really wonderful and it was fun celebrating Jon and Marisa with everyone and sharing their joy! So much happiness and wonderful memories with the hope of lots more happy memories to come!! 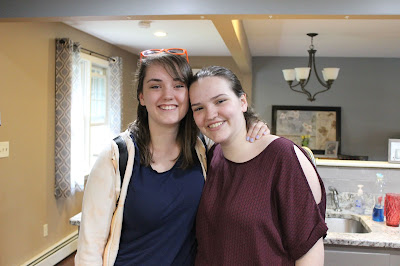 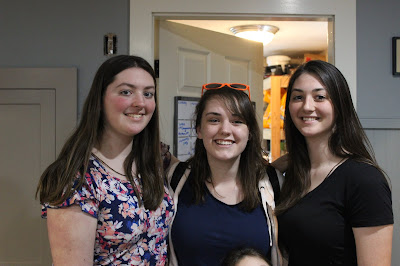 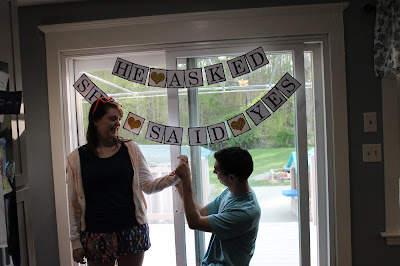 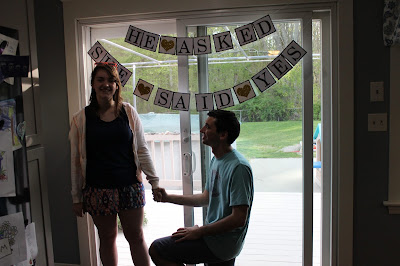 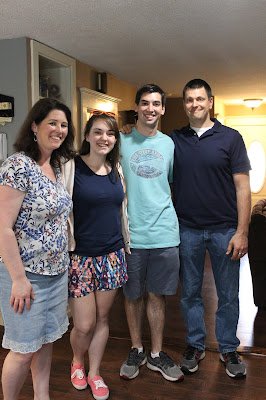 Growing Our Family In A Whole New Way!

This was the amazing moment that I have been keeping quiet for over four months!

To get to "E" Day...(Engagement Day, get it?;)...I need to rewind to a few days before Thanksgiving. It was the Tuesday morning of Thanksgiving week and I was just about ready to leave for work. The only other person still in the house was Jon. Jon is a very faith filled young man and had spent several months discerning the vocation God was leading him to. As a mom, my heart was torn. I wanted Jon to walk the path that God meant for him. I was just very attached to Marisa, Jon's girlfriend of 3+ years...we all are!...and thinking about her not being a part of our family made me feel very sad.  Because Marisa has been a part of our lives for so long and fit into our family so well, it would be a true loss for all of us if she wasn't around anymore. However, choosing a vocation was Jon's journey, and it was very emotional for me to stand by and wait. It's definitely part of the "Art of Letting Go" as your children embark on the journey to become the person they are meant to be. As a mom, I have to step back and let go of my own hopes and dreams for my children and work to embrace who they are meant to be. It's definitely not easy! With lots of children, I will definitely get lots of practice!

That particular morning in November, Jon nonchalantly told me that he decided that he was called to the vocation of marriage and that he was going to propose to Marisa.

I was certainly surprised! I was very happy! Jay and I love Marisa. She's been around our family for a long time, so hearing that she was going to be an official member just felt right. I may have cried just a little when Jon told me the good news.

I'm sure I had a really big smile on my face at work all morning, but I had promised to keep the news a secret from everyone except Jay. We texted happily back and forth most of the day.

Emotions are a funny thing....

That same afternoon I spent quite a bit of time crying! This time, there was quite a bit of grief mixed in with the joy. The realization that my son was ready to take this big step into independence and away from the fold of our family hit me hard. I was thinking how the house would feel once Jon didn't live here anymore: How I would miss hearing him play music in the shower, see him napping on the couch, sharing casual conversation as he sat in the living room, and not having his  silly/teasing personality interacting with his siblings. The grief I felt hit me like a tornado and then left just as quickly. I couldn't believe my yo-yo of emotions!

Thankfully, it was the joy and excitement that returned!(Jay just shook his head at me!)

It was really fun hearing Jon's ideas about proposing. Jon also asked me to go with him when he picked out the ring! That really made my heart SO happy that he asked me to be a part of something so special. 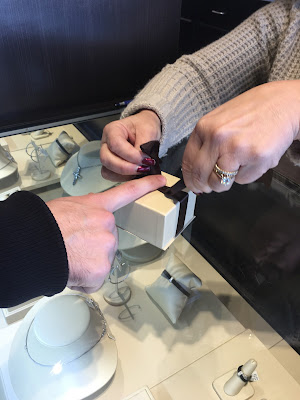 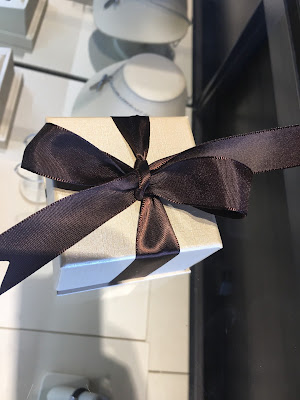 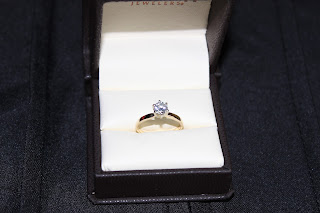 The entire time that Jon was shopping, I had the refrain line from Matthew West's song, "Day One", stuck in my head.

It was such a momentous occasion....a defining moment for Jon that I understood the depth of in a much different way than my son. I had to keep reminding myself to just be in the moment that day.  I was trying to be a loving supportive mom...and not get stuck in the whirlwind of my emotions! There was a part of me that just kept thinking that it was impossible that I have a child who is no longer a child and is ready to branch off into his own life. How did this even happen?!? I still have no idea...but this post is not the time to delve into my current identity crisis!

Jon did a great job picking out the ring! Jon had consulted with Marisa's sister, Bridget, who knew the details of what Marisa liked. Jon had a budget in mind...which did increase just a tad once he saw the actual rings. Jon had a good balance of staying in his comfort zone and picking out a beautiful, classy ring that he thought Marisa would love.

And, once again, I had to remain silent! Argghh...it was SO hard! There were many times I almost slipped...especially in front of Sarah! It's hard to hold back something so exciting.

I'm writing this with a yet unknown number of days until "E Day".  It's a snowy day. Kids are headed off to school. I'm home with Peter who is recovering from 5 days of having a fever, and trying to figure out when I can fit in a trip to the grocery store and the bank. Everything seems to be just a regular normal day.

And yet, there's a countdown to one brief moment that will be the beginning of many changes and another stage entirely for our family. We're going to be growing our family in a whole new way...and I couldn't be happier about it!

p.s. I will share the details about the actual proposal and the Engagement Party we had for them in another post coming soon!
#SpoilerAlert...she said "yes"! 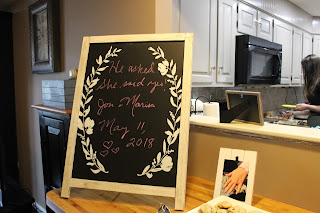 Email ThisBlogThis!Share to TwitterShare to FacebookShare to Pinterest
Links to this post
Labels: engagement, family, Growing up, Living in the Moment

I have dubbed last week as "Sacrament Week" for our family!

Last Wednesday night, both Peter and Ellie received the Sacrament of Confirmation. It was a great night for both of them. 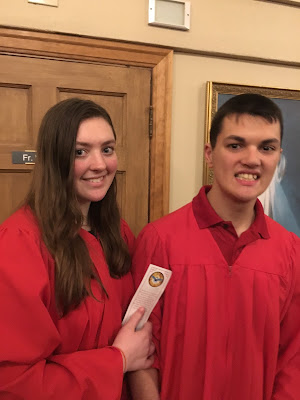 Peter chose Jon to be his sponsor and he chose the name Nicholas as his Confirmation name. 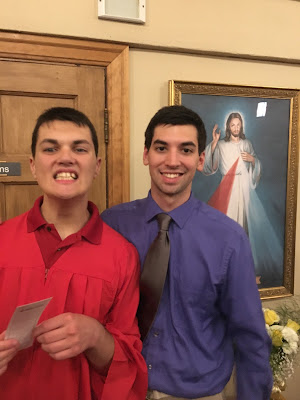 Ellie chose my dad to be her sponsor and chose the name Therese as her Confirmation name.

It was really such a grace filled night. I am so grateful for the blessings. Ellie is such a faith filled young lady that Jay and I are so incredibly proud of.

Having Peter receive Confirmation in the same ceremony was really special to us. Peter did a great job with a little prompting from Jon. Having Peter reach a "neurotypical" milestone always touches me in a special way!

Luke is such a good boy with a very big heart. Luke was SO excited to receive his First Communion! The night before at dinner, Luke randomly called out, "Who's excited to see me receive my First Communion? Raise your hand!"

He just cracks us up!

Here are some of my favorite pics from the day! 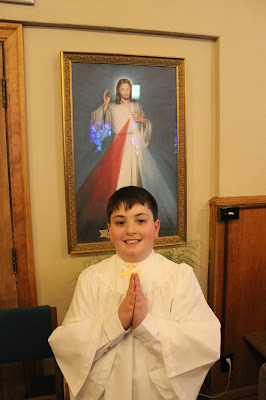 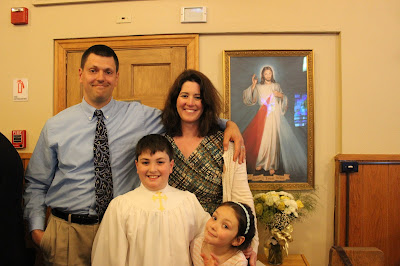 BONUS PHOTO
I was putting something away in our closet yesterday, (a few days after Luke's big day), and spied a bag of old photos Jay's mom had given him when his grandmother passed away about 8 years ago.  I came across this gem of Jay with his grandparents and sisters on the day of HIS First Communion! I thought it was a little "Godincidence" because Luke had been talking to Jay before his First Communion about Jay's "Babi and Pupa" and decided to offer his First Communion for them.

Faith and family...it doesn't get much better than that!

This coming weekend is being dubbed "Milestone Weekend"....more on that next week!